…did you know that the first recorded pioneer of man-powered flight in the British Isles was an Anglo-Saxon monk from Malmesbury Abbey called Eilmer (or in Old English, Æthelmaer) who lived between about 980 and 1070? 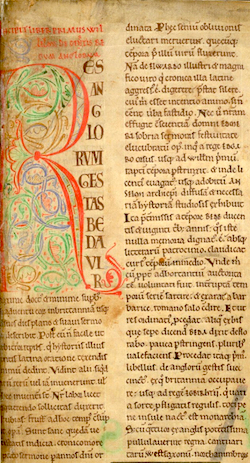 Eilmer’s life is recounted in the Deeds of the Kings of England [pictured here] by William of Malmesbury; indeed, William may have met him when Eilmer was an old man. According to William, many years earlier Eilmer had attached wings to his hands and his feet and jumped from a tower, travelling at least a ‘stadium’ (possibly 200 metres or 600 feet), before being caught by turbulence and breaking both his legs. Eilmer later claimed his error was not fitting a tail to himself, as well as wings. For comparison, the Wright Brothers’ first flight covered about 120 feet.

Eilmer was probably born in the 980s and died after 1066, so his flight probably took place in the 1000s or 1010s. We can guess Eilmer’s lifespan because William of Malmesbury claimed Eilmer had seen Halley’s Comet twice, in 1066 and presumably in 989….

The text, which you can read translated into modern English at archive.org, says:

He was a man of good learning for those times, of mature age, and in his early youth had hazarded an attempt of singular temerity. He had by some contrivance fastened wings to his hands and feet, in order that, looking upon the fable as true, he might fly like Daedalus, and collecting the air on the summit of a tower, had flown for more than the distance of a furlong; but, agitated by the violence of the wind and the current of air, as well as by the consciousness of his rash attempt, he fell and broke his legs, and was lame ever after. He used to relate as the cause of his failure, his forgetting to provide himself a tail.

NEXT POST: Why do they fear British money is made of meat?