A new scientific analysis aims to understand the fluid dynamics of the Boston Molasses Flood. The bursting of an enormous (about 2 million gallons) tank of molasses created one of the biggest disasters ever to hit that city. Although it happened almost a century ago — on January 15, 1919 — there’s been only a vague scientific understanding of how the molasses flowed. Estimates from that era said that a 30-foot-tall wall of molasses washed over Boston’s North End neighborhood at a speed of about 35 miles per hour. 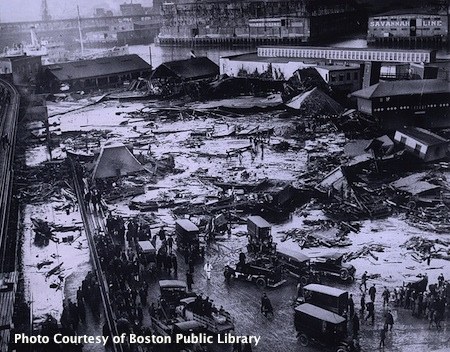 Nicole Sharp will present the first findings of her investigation, at the American Physical Society Division of Fluid Dynamics meeting, in Portland, Oregon. The specific when and where: Monday, November 21st, 6:01pm, Room E147-148. The session is called “In a sea of sticky molasses: The physics of the Boston Molasses Flood.” Colleagues Jordan Kennedy and Shmuel Rubinstein, both from Harvard University, will be part of the presentation. This short video gives a preview:

Nicole Sharp is of course the creator of FYFD, the world’s most popular web site about fluid dynamics. Until very recently she lived in the Boston area, where she (among other things) began the extensive (and still ongoing) research into what happened in that long ago sticky, deadly flood.

You may also be familiar with Nicole Sharp from her adventures on the Improbable Research podcast where, most recently, she explored a physics study as to whether cats can be both a solid and a liquid (and in the process got to wax happy at the chance to talk about the mathematical physics concept called “the Deborah Number”).

Nicole Sharp continues to do research on this. She plans to release a small flood of new findings on February 18, 2017, in the Improbable Research session at the annual meeting — in Boston — of the American Association for the Advancement of Science (AAAS).

UPDATE (November 24, etc., 2016): Some of the news reports about the presentation in Portland: