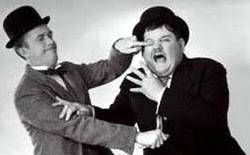 In many old movies, slapstick comedians would poke other comedians in the eye. A Dutch medical team, writing in a Scottish medical journal, calculated the physical damage this would have done if the eye-poking had been real eye-poking, not just pretend, poking-fun poking:

One of the characteristics in Laurel and Hardy films is a lot of physical violence. The present study examines the occurrence of eye trauma in Laurel and Hardy movies and discusses the impact they could have been had if the films were set in reality.

All 92 movies starring Laurel and Hardy as a pair in leading roles were watched together by the authors and were scored for any eye trauma. Eighty-eight eye traumas happened, of which 48% were directed at Hardy. The eye poke was the most frequently occurring eye trauma and the traumatic corneal abrasion was very likely the most frequently occurring injury. Among the most serious causes of eye trauma were the pin of a door handle, a stick, a champagne cork, a tree branch and tacks.

Conclusion: Without a doubt, if their films had been reality, especially Hardy but also Laurel and several other people, would have suffered from serious eye injuries caused by the 88 eye traumas.

Here are Laurel and Hardy performing in the eye-opening film called “Hog Wild”: