Troy Hurtubise, who was awarded the 1998 Ig Nobel Prize the field of safety engineering — for developing, and personally testing a suit of armor that is impervious to grizzly bears, is still crowdfunding his new project, which is called PROJECT GRIZZLY 2. Troy explains:

Project Grizzly was Quentin Tarantino’s favorite movie of 1996: a documentary following North Bay inventor and conservationist, Troy Hurtubise, on his quest to test a protective suit against a real grizzly bear. Now, two decades later, Troy seeks to finally have the encounter with his new suit the Ursus Mark VIII. 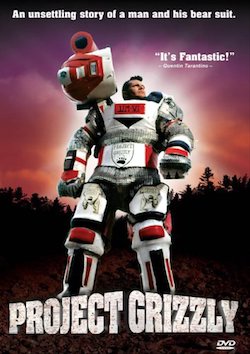 The money is being raised to finance Troy’s second expedition to the Rocky Mountains with the original film crew and the construction of the Ursus Mark VIII.  Any donations surpassing $50, 000 or more will guarantee the individual a spot on the expedition with Troy and a cameo in the film. Filming for the expedition will begin in July of 2016.

The continuation of Project Grizzly, which cemented Troy’s Legacy, was used as a significant stepping stone for his ongoing career as an inventor. Some of these creations have been featured multiple times on discovery channel and other major networks. The sequel to Project Grizzly, Project Grizzly 2: The Forbidden Trail, will show a detailed look at some of his most famous creations and many new ones. Help fund the epic conclusion to an adventure that is two decades in the making and, for the more daring, take this opportunity to be apart of it.

Back in May of this year (2016), the new project was hardly more than a glint in Troy’s mind. Now it is closer to being a reality. Troy seeks to raise $770K in crowdfunding. Pledges have already reached the $400 level, by legend the most difficult part.

Here is the original Project Grizzly, a documentary film produced by the National Film Board (NFB) of Canada, about Troy and his early adventures (yes, there were later adventures, in plentitude, Troy being the nearest real thing we have, in modernity, to the legendary questing knights of the time of King Arthur):

Troy has grit, drive, persistence, deep inner fortitude, and git-up-and-go, in abundance. As an additional source of funding for his new research, Troy is reluctantly selling one of his many inventions, the R-light (” ‘R’-light embodies a collection of varying electromagnetic fields and other principle forces within a closed, semi-vaccum containment field. As the collective energy of the whole becomes one unified singular, a staggered, photonic beam is created.”). That historic invention is now available on EBay (however, for reasons unstated, it “may not ship to the U.S.”).