Troy Hurtubise, who won an Ig Nobel Prize in 1998 for devising and personally testing a suit of armor that he hopes will protect him against grizzly bears, has now invented and personally tested a machine that promotes the growth of hair on human heads, and also promotes the growth of plants, Chris Dawson of Bay Today reports Troy reporting. Here’s a chunk of that report of Troy’s report:

Hurtubise new invention all about plant and hair growth

“I’ve been told from some scientists that it will come down as one of the top three innovations of this decade alone.”
Aug 31, 2016 10:34 AM by: Chris Dawson

It may be hard to tie together but the North Bay inventor says his new invention, the R-Light will be able to do two incredible things; cure male pattern baldness and treat vegetable seeds so they can grow in harsh conditions like the rain forest with next to no light.

“What I did is spend thousands and thousands of hours researching all of the principles that they are using and I put it together in one machine.  So in this machine is more than just light.  You have ultrasonic sound waves, you have over 200,000 volts of open electricity, magnetic vortexes and magnetic fields, you’ve got sonar, you have six different kinds of lasers.”

All the work on the machine has been conducted over the past few months in his small lab in downtown North Bay….

This photo, from the report, shows “Troy’s son getting his treatment for Male Pattern Baldness”: 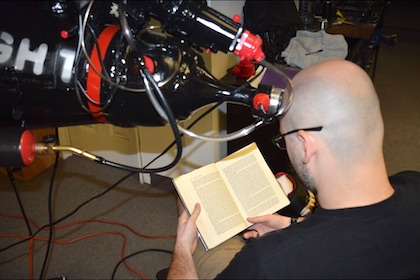