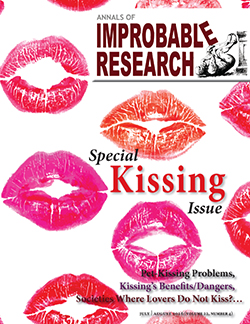 What’s the deal with people who yearn to eat or to be eaten — to literally consume, or to literally be consumed — during sex. And what’s a good example of an early medical report about a pestle found in a rectum?

Those questions are addressed in studies that are profiled (in the column “Boys Will Be Boys: Eat or Be Eaten, and a Pestle“) in the special kissing issue of the Annals of Improbable Research.