The Facial Action Coding System (FACS) as depicted above, was chosen as a reference for the ‘Networked Yawn Detector’ (a car-driver safety-monitor) developed by Zhengrong Yao and Haibo Li of the Department of Applied Physics and Electronics, Umeå University, Sweden.

“We test our system publicly, 26 students from the Applied Physics and Electronic Engineering Department of Ume [sic] University tried the system. They all have driving experience. Each attendant was requested to perform at least 10 yawns, the correctly recognized number was counted. The system was trained using the training data collect from out lab group member’s yawn sequences. The system beeps as the calculated probability of the mouth motion is within a predefined range, the range was settled by our experience.”

“In this paper the Facial Action Coding System is suggested to be used to represent facial expression variations. We have demonstrated that probabilistic coupling of mouth actions with Hidden Markov Models is a promising way to handle dynamic facial expressions. The hierarchical framework developed in this paper can also be extended to handle the general human mental state estimation problem. User tests and subject evaluation show the technology is appealing for car users, and also give hints for further development of such kind of system.” 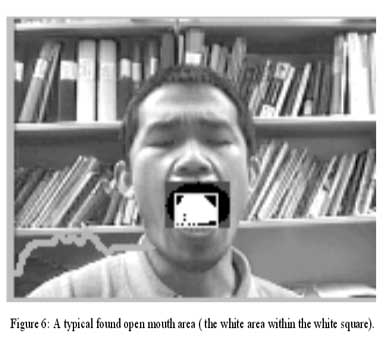