There are many ways to look at the span of sizes of things in the universe. Here are three.

The cryptically named xurb1a made this video called “The Universe in 4 minutes“:

Some years ago, Charles and Ray Eames made this video called “Powers of Ten“: 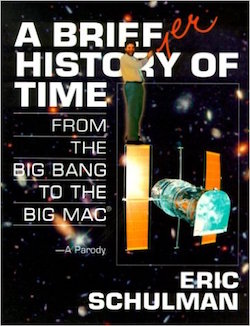 Between way back then and now, Eric Schulman wrote a book called A Briefer History of the Time (the title was later borrowed by Stephen Hawking for a book of his own, which was fitting because Eric Schulman’s book title was a tilt-nodding tribute to Hawking’s earlier book called A Brief History of Time. Eric Schulman’s book began as Eric Schulman’s “History of the Universe in 200 Words or Less“, a talk that he first performed at the 1997 Ig Nobel Prize ceremony (a book publisher, in the audience at that ceremony, offered him a book contract on the spot; thus came the book version), and later performed at many other places, including the National Science Foundation.

The original 200-words-or-less piece was published in the Annals of Improbable Research, early in 1997, and subsequently was translated into many languages, by many volunteers. Eric maintained the translations on his personal web site, which subsequently vanished when Verizon did away with personal web sites. Those dozens of translations exist now (perhaps only) on the Internet Archive Wayback Machine.