Although car horn honking might be viewed by some as a measure of aggression it can also have its positive side. For example in driving simulators, where participants sometimes drive more slowly than they would do on a real road (when not attending to driving) – maybe a horn honk would encourage them to drive more realistically? Investigators Heejin Jeong and Paul Green of the University of Michigan, Industrial and Operations Engineering dept., and the Transportation Research Institute (Driver Interface Group), experimentally tested such a scenario. 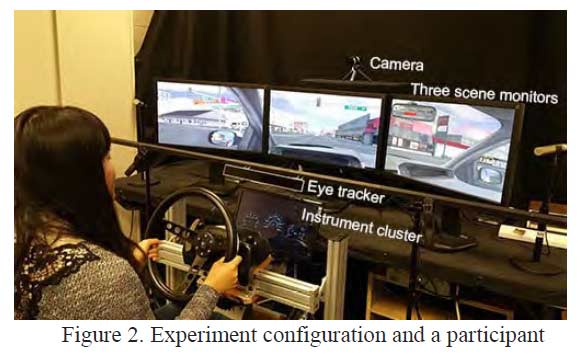 A fixed-base National Advanced Driving Simulator MiniSim was used in these experiments (see Figure 2). If drivers were performing manoeuvres that were deemed to be too slow (or too close to other virtual vehicles) they were automatically subjected to honking.

“The 300 ms horn sound sequence consisted of two 100 ms beeps separated by 100 ms. The sound was typical of a car in the U.S. and was found on the Internet. See http://www.soundboard.com/sb/Car_Horn_Sounds for an example.“

The results showed that :

“The number of honks per subject varied from 0 to 6 for driving too slowly (less than 25 mi/hr) and 0 to 8 for delayed responses when a traffic light changed from red to green. Older drivers received 2.4 times more honks than younger drivers.”

Lending support to the hypothesis that virtual honking may help to encourage more realistic driving behaviour in simulators :

“Within 5 s after the following vehicle honked between intersections, the mean speed driven increased by 5 mi/hr.”

See: ‘Honking Helps Overcome the Driving Too Slowly Problem in Driving Simulators’ in: Proceedings of the Human Factors and Ergonomics Society Annual Meeting, September 2015, vol. 59 no. 1 1646-1650.

Note: Anecdotal rumours recently heard by Improbable suggest that honking might currently be on the rise in some countries – due a habit that some drivers have acquired: checking their smartphone messages at traffic lights. If you can confirm this, please comment below.