Anyone who has driven a vehicle in various different countries might have observed that the national rate of ‘horn honking’ varies considerably – but why? A widely-cited study by Douglas T. Kenrick and Steven W. MacFarlane (published in 1986) investigated whether one simple variable – temperature – might be having an effect. 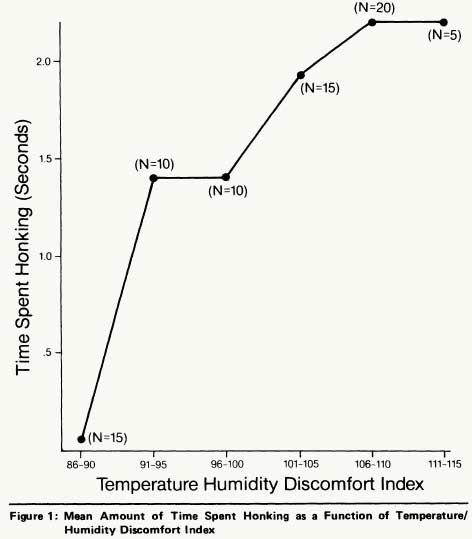 The team organised that a “female confederate” driving a Datsun 200SX would repeatedly perform a potentially irritating manoeuvre at a set of traffic lights in Pheonix Arizona.

“When the light turned red, she moved her car to the head of the intersection and waited for a subject to pull in behind her. The confederate then waited for the light to turn green and remained stationary throughout the 12-second course of the light.

The confederate was instructed to keep still, with her eyes forward, car in neutral, foot off the brake, and her hands on steering wheel. Once the green light had changed, the confederate made a legal* right turn on the red light.”

An observer recorded how long the cars which were behind her spent honking their horns. 75 such tests were conducted between April and August, when the “Temperature Humidity Discomfort Index” varied from 86º to 116º (Fahrenheit).

“Results indicated a direct linear increase in horn honking with increasing temperature. Stronger results were obtained by examining only those subjects who had their windows rolled down (and presumably did not have air conditioners operating).”

* Question [optional]: Under what circumstances is it possible to make “a legal right turn” on a red light?