Andreas Kluth, the Berlin bureau chief of the British magazine The Economist, wrote an essay called “Being German is No Laughing Matter“. Here is the beginning of that essay:

Shortly after moving back to Germany in 2012 after decades of absence, mainly in Anglo-Saxon countries, I took my kids to the Berlin zoo. The children were two, four and seven at the time, and had already developed a keen sense of irony (particularly the eldest one) – or at least they understood that dad doesn’t always mean things literally, because, you know, it’s funny. So we queued for our tickets, trading silly jokes. Like me, the kids are dual citizens of America and Germany, though at that time, fresh from California, we still felt more American and more at ease in English. But we deliberately spoke German, to help us acclimatise to our new home. In a mood of levity, we approached the ticket window.

The lady behind it informed me that the price for the elder two was such-and-such and the little’un was free. “What if I pay you a bit extra and you keep them?” I suggested. The kids snortled and started naming prices that might clear the market.

The lady stared back, horrified. Then, slowly, she leaned forward to look at my children, who stiffened. “Your dad does not really mean that,” she said. “He does not really want to sell you.”

That pretty much killed the mood for all four of us until somewhere between the giraffes and the polar bears. “Why did she say that?” my daughter asked, in English, as though out of an instinct for cultural self-preservation. As I pondered the question, I couldn’t help but think there was something peculiarly German about the lady’s reaction. First, Germans really, really struggle to grasp non-literal meanings. Second, Germans really, really can’t help but say when they think you’re wrong…. 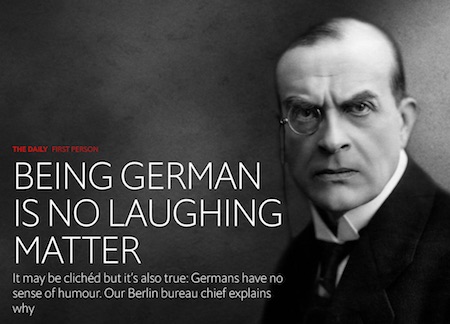