Taxonomists may squabble and quibble (as a recent article called “Why Do Taxonomists Write the Meanest Obituaries?” makes clear), but most taxonomists are baffled by the works produced by the late Chonosuke Okamura, discoverer of the mini-creatures. 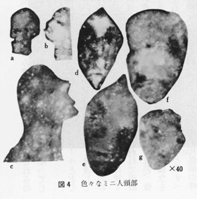 Here is a set of photographic images from one of Okamura’s books. These, say Okamura, are faces of several minimen.

Okamura was posthumously awarded an Ig Nobel Prize in the field of biodiversity, in 1996, for discovering the fossils of dinosaurs, horses, dragons, princesses, and more than 1000 other extinct “mini-species,” each of which is less than 1/100 of an inch in length.