Subway benches, mundane though they might seem, can sometimes become ‘multistable’ – thereby attracting the attention of Robert Rosenberger (who is an assistant professor in the School of Public Policy at the Georgia Institute of Technology). The professor, a specialist in postphenomenology, has recently examined the multistability and agency of mundane artifacts (from speed bumps to subway benches) in a paper for the journal Human Studies (“a quarterly journal dedicated primarily to advancing the dialogue between philosophy and the human sciences.”)

Here is a short extract from the section in the paper entitled: ‘Cross-Examining the Public Bench’ 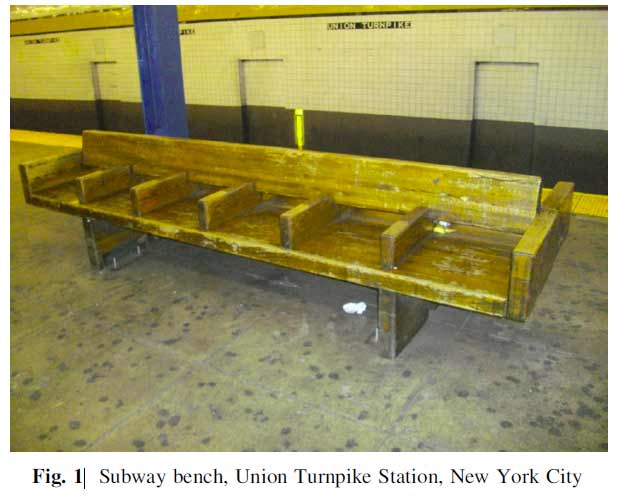 “For a person accustomed to sitting on a particular bench in an everyday sense (say, waiting for the bus each morning), habits of conception and bodily approach develop. The details of the relationship an accustomed user shares with the typical (i.e., non-sleep-prevention) bench in its dominant stability can be drawn out by contrasting that stability with the bench-as-bed alternative. That is, for one that sits on a bench each day, the details of her or his ‘‘sitting’’ relationship with that bench can be drawn out by comparing it with what it would be like if this person were to instead lay across that same bench. These details include the particular manner in which one comports one’s body with respect to use in terms of the dominant stability, just how deeply transparent this relationship is, and just how stubbornly sedimented these aspects of one’s approach may be. If that same user were asked to consider lying down across the bench, she or he may not engage this alternative stability nearly as automatically or transparently, nor would the same aspects of the bodily interaction with the device become transparent were she or he to eventually become accustomed to this alternative usage.”

See: Multistability and the Agency of Mundane Artifacts: from Speed Bumps to Subway Benches