The Luxuriant Flowing Hair Club for Scientists (LFHCfS) proudly announces its Woman and Man Of The Year for 2016. The two scientists are, respectively, a Danish researcher who studies polymer micro and nano engineering, and a Scottish researcher for NASA who studies airborne particles in earth’s atmosphere. 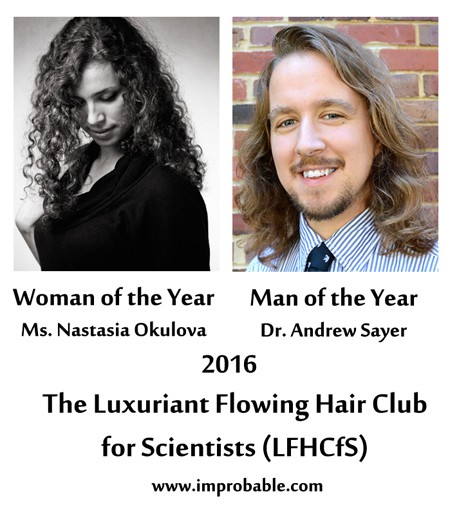 Here is thrilling detail about each of them.

Ms. Okulova is a Ph.D student working on micro and nano technology and engineering methods based on a polymer materials platform, at the Technical University of Denmark. Her collaboration with Danish company, Danapak Flexibles A/S aims to implement functional nano structures into the surface of the packaging foils. Applications of this range from self-cleaning and anti-icing surfaces for trains and windmills (which would save a lot of energy), to preventing yoghurt from sticking to its lid.

When asked about her hair, Ms. Okulova said:

“Curly hair is like science, you never know what to expect of it. It is in a state of a superposition between being easy and hard to work with. From time to time you can wake up with a nice-looking hair. You’d think that the hair cells are dead, but I suspect that my hair has a life of its own.”

Dr. Sayer is a physicist working on Atmospheric Remote Sensing at the NASA Goddard Space Flight Center in Maryland, USA, studying atmospheric aerosols around the world. (Dr. Sayer is the second NASA Goddard scientist to be honored as an LFHCfS person of the year. The first was Dr. Illana Harrus, in 2002-3.)

Much of Dr. Sayer’s work focuses on finding the most effective ways of using satellite instruments to observe aerosols. You can see a video of him talking about this research, below, courtesy of the NASA Goddard YouTube channel.

Dr. Sayer received his Ph.D at the University of Oxford, UK.
His papers and publications include: “Aerosol remote sensing using AATSR“, “Satellite-Based Spatiotemporal Trends in PM2.5 Concentrations: China, 2004–2013“, and “Implications of MODIS bow-tie distortion on aerosol optical depth retrievals, and techniques for mitigation.“

When asked about hair care, he said:

“I was initially sceptical but, after a lot of gentle prodding from my girlfriend, I started using conditioner when washing my hair. The results of my several-year scientific experiment into this have revealed that it really is better than using shampoo alone.”