Cheese research, by an intrepid, longtime student of cheese. (Thanks to Adam K. Olson for bringing this to our attention.) Alison Mah reports, for the Ottowa Citizen: 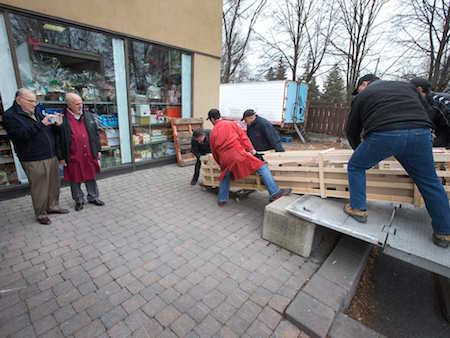 Anthony LoFrisco had been waiting almost 70 years to find another 1,000-pound provolone. He just didn’t think he’d have to make the seven hour, 673-kilometre drive from Wilton, Connecticut, to Ottawa to get it.

“It’s incredible beyond belief,” said LoFrisco, who arrived in Ottawa on Monday night with his son, Anthony Jr., to get a glimpse on Tuesday morning of the 1,000-pound provolone that came by boat from northern Italy and was delivered by truck to Nicastro’s Italian Food Emporium on Merivale Road. It took six men to unload it.

LoFrisco, a retired lawyer with a lifelong passion for cooking, put a halt on the publication of his Sicilian memoir-cookbook just to drive to Ottawa for the cutting of the provolone — a story he’ll include in his book….

BONUS: The poem “Ode on the Mammoth Cheese Weighing Over Seven Thousand Pounds“, by James McIntyre, the noted Canadian cheese poet, presented anew on a special occasion a few years ago.