The idea of a molecular wheelbarrow was first raised [Improbable believes] in 2002 by C Joachim, H Tang, F Moresco, G Rapenne and G Meyer in the journal Nanotechnology, Volume 13, Number 3: ‘The design of a nanoscale molecular barrow’. Later, as described in Surface Science Letters, 584, 2005, L153 – L158, a research team (with three of the original authors) not only managed to build one, but also to nanoscopically ‘photograph’ it. 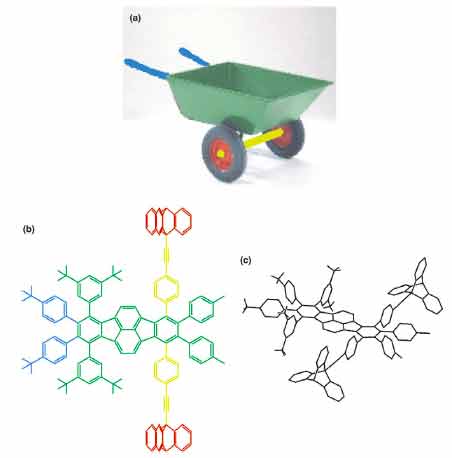 Sticky Note: As Richard Feynman foresaw over half a century ago (in: ‘Plenty of Room at the Bottom’ ) quantum stickiness can be non-trivial at such dimensions :

“It would be like this: After you have made a part and you unscrew the nut from a bolt, it isn’t going to fall down because the gravity isn’t appreciable; it would even be hard to get it off the bolt. It would be like those old movies of a man with his hands full of molasses, trying to get rid of a glass of water. There will be several problems of this nature that we will have to be ready to design for.”

And the authors of the 2005 paper mention similar effects :

“Lateral motion of the wheelbarrows is not possible, because of the strong interaction of the two front wheels with the metal surface.“