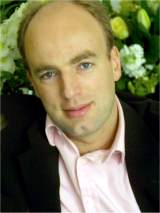 The taste-smell-sound-look-and-feel research of Ig Nobel Prize winner Charles Spence gets a good, sensory-rich going over, in a New Yorker profile called “Accounting for Taste,” by Nicola Twilley. It says, in part:

Outside the academy, the paper failed to generate any interest until 2008, when its authors were awarded the Ig Nobel Prize for Nutrition. The Ig Nobels are intended to “honor achievements that make people laugh, and then think,” but media coverage of Spence’s win focussed mostly on the former, with headlines that ranged from “BOFFIN GIVES EATERS SOUND ADVICE” to “WHY RESEARCH THAT?!” At first glance, the “sonic chip” experiment, as Spence fondly refers to it, does seem trivial. In reality, it was an elegant psychological trick, offering insight into the way the brain combines two separate sensory inputs—the crunching sound and the tactile oral sensation of a potato chip—into one multisensory perception. Spence lists the honor at the top of his curriculum vitae….

Other researchers have joined him in exploring this new territory, but “Charles is a pioneer,” Francis McGlone, a neuroscientist at Liverpool John Moores University, told me. “His contribution to the field of cognitive psychology is seminal.” Breslin said, “He’s pushing the frontier in all kinds of ways that I wouldn’t have predicted.” In 1997, at the age of twenty-eight, Spence was invited to set up his own research lab at Oxford, and his Ig Nobel is just one in a long list of accolades, including a 2003 award from the European Society for Cognitive Psychology, in recognition of his “outstanding contribution to cognitive psychology in Europe.” …

“These things might seem trivial or esoteric,” Spence said. “But they do exist, and most of us share them, so they must be pretty fundamental.” Scientists—Spence included—do not yet fully understand exactly why these sensory interactions occur, or even where in the brain most take place. In a review paper published earlier this year, Spence listed the most common explanations that have been offered….

One reason that the senses have almost always been studied in isolation is that it is remarkably difficult to disentangle them sufficiently to observe the effect that one might be having on another. Spence has managed to study them together by, as McGlone put it, “slipping in through the perceptual windows” created by sensory illusions….

The 2008 Ig Nobel Prize for nutrition was awarded to Massimiliano Zampini of the University of Trento, Italy and Charles Spence of Oxford University, UK, for electronically modifying the sound of a potato chip to make the person chewing the chip believe it to be crisper and fresher than it really is. (REFERENCE: “The Role of Auditory Cues in Modulating the Perceived Crispness and Staleness ofPotato Chips,” Massimiliano Zampini and Charles Spence, Journal of Sensory Studies, vol. 19, October 2004,  pp. 347-63.) this photo shows Massimiliano Zampini munching a chip — they used Pringles, which are more consistent in shape and constitution than other chips — inside the booth where the munch-a-chip research was done: 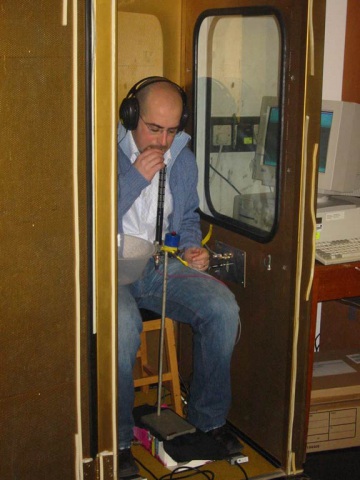 BONUS (unrelated, mostly but not entirely): How a dead duck changed my life.