“The Needless Complexity of Academic Writing” sings a headline in The Atlantic magazine. The article beneath the headline, by Victoria Clayton-Alexander, is profiles Ig Nobel Prize winner Danny Oppenheimer [pictured here] and others who fight muddle and murk. The article says, in part:

(Oppenheimer for his part believes he got the award because of the paper’s title: “Consequences of Erudite Vernacular Utilized Irrespective of Necessity: Problems with Using Long Words Needlessly.” The title made readers laugh, he told me—and then think.) Ultimately, Oppenheimer says the attention the Ig Nobel brought to his research means it’s now being used to improve the work of students in academic writing centers around the country.

Oppenheimer was awarded the 2006 Ig Nobel Prize for literature. 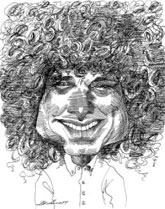 The Atlantic article also cites related work by psychologist Steven Pinker, who is also well known  for being the charter member of the Luxuriant Flowing Hair Club for Scientists (LFHCfS).