Steven Pinker, psychology professor extraordinaire and charter member of the Luxuriant Flowing Hair Club for Scientists (LFHCfS), gave an interview to Colleen Walsh of the Harvard Gazette. Here is the concluding section of the interview. The accompanying photo is by Stephanie Mitchell of the Harvard News Office:

Q: No Steven Pinker interview would be complete without a question about your hair. I recently saw a picture of you from the 1970s, and your style appears unchanged. Why haven’t you gone for a shorter look?

A: First, there’s immaturity. Any boy growing up in the ’60s fought a constant battle with his father about getting a haircut. Now no one can force me to get my hair cut, and I’m still reveling in the freedom. Also, I had a colleague at MIT, the computer scientist Pat Winston, who had a famous annual speech on how to lecture, and one of his tips was that every professor should have an affectation, something to amuse students with. Or journalists, comedians, and wise guys. I am the charter member of an organization called The Luxuriant Flowing Hair Club for Scientists. The MIT newspaper once ran a feature on all the famous big-haired people I had been compared to, including Simon Rattle, Robert Plant, Spinoza, and Bruno, the guy who played the piano on the TV show “Fame.” When I was on The Colbert Report, talking about fear and security, he pulled out an electromagnetic wand and scanned my hair for concealed weapons. So it does have its purposes. 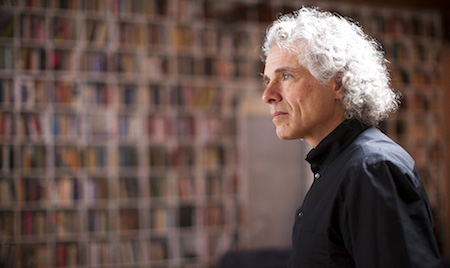