The Reserve Bank of Zimbabwe, the nation’s government bank, which officially controls the nation’s money, announced an end game for the famous Zimbabwean dollars. The dollars earned an Ig Nobel Prize for the bank’s previous president, Dr. Gideon Gono. The 2008 Ig Nobel Prize for mathematics was awarded to Gideon Gono, governor of Zimbabwe’s Reserve Bank, for giving people a simple, everyday way to cope with a wide range of numbers — from very small to very big — by having his bank print bank notes with denominations ranging from one cent ($.01) to one hundred trillion dollars ($100,000,000,000,000). [Dr. Gono explained his reasoning in creating that money, in the book Zimbabwe’s Casino Economy — Extraordinary Measures for Extraordinary Challenges, Gideon Gono, ZPH Publishers, Harare, 2008, ISBN 978-079-743-679-4.]

This month — June 2015 —the  bank issued an official statement, which specifies the terms of the end-times conversion:

After 30 September 2015 bank notes that have not been exchanged shall be considered demonetised or decommissioned. Bank Account Holders Banks will pay the equivalent US$ amount for each account balance as at 31 December 2008 converted as follows: a) Accounts with balances of Zero to Z$175 quadrillion will be paid a flat US$5. b) Accounts with balances above Z$175 quadrillion will be paid the equivalent value after applying the UN exchange rate of US$1/Z$35 quadrillion or US$1/Z$35,000 (revalued)

Here is a picture of one of a Zimbabwe $100 trillion dollar bill: 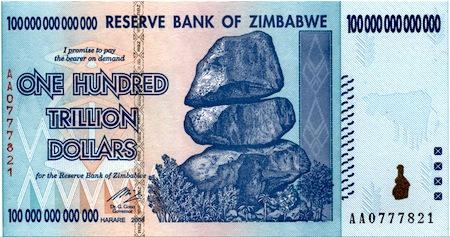 (Thanks to Gennadiy Kosoy for bringing this to our attention.)