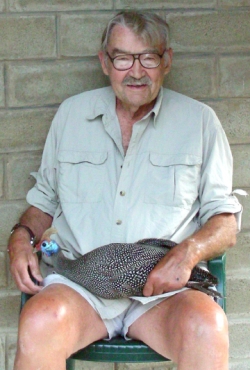 Chiefly known as a specimen-based ornithologist and tireless collector of scientific specimens, Bob Dickerman has enriched the collections of natural history museums, from Alaska to New Mexico, and described dozens of new subspecies of mostly Mexican birds. He is depicted here with a Helmeted Guineafowl (in South Africa, 2011) that soon became specimen RWD #27413 in his personal catalogue.

As noted in a biographical sketch that introduced a special volume of Western Birds (43 [2012]) honoring his contribution to biology, Bob Dickerman had ‘… a naturalist’s eye and [was] keenly interested in the world around him’.

I did not know him personally, but we had a short and memorable e-mail correspondence about my Ig Nobel winning paper ‘The first case of homosexual necrophilia in the mallard’. He had noticed my paper, and responded to it on 23 March 2009:

” … neither you nor the “Board of Governors” at Harvard, knew of the very scattered, but plentiful, American literature on “Davian Behaviour”. The history of this behavior began when on 26 April 1959, I was driving down a dirt road [in Dakota County, Minnesota (KM)] , and stopped to look at a dead 13-striped ground squirrel (Citellus tridecimlineatus) lying dead in the middle of the road. As we stopped, another ran out from the side of the road and laid down and seemingly copulated with it! I published this observation in Journal of Mammalogy, naming it Davian Behavior. It became a “claus celebre” (spelling), and my next two notes [probably about the same subject (KM)] were rejected out-of-hand [because] two fellow graduate students sent the editor the limerick from which I got the name:

There was on old miser named Dave
who kept a dead whore in a cave.
He said “I’ll admit, I’m a bit of a shit”
but look at the money I save.”

Dr Dickerman was right. Back in 2001, I was unaware of both Dave (the old miser) and ‘Davian Behavior’ and so I completely missed two published cases of animal necrophilia – his own encounter with the 13-striped ground squirrel (published as “Davian Behavior Complex” in Ground Squirrels) – and even one involving a dead female mallard in Fort Collins, Colorado, witnessed and published (‘Avian Davian Behavior‘) by Philip N. Lehner in The Wilson Bulletin (1988).

Below is the most important part of his now classic ‘Davian Behavior’ paper:

By stressing the position of the dead ground squirrel, Bob Dickerman showed great insight in the true nature of this behavior and did not call it necrophilia.