“Polar Bears Unlikely to Thrive on Land-based Foods” says the headline in a press release from the US Geological Survey [USGS]. This adds a new piece to the puzzle of what will happen as polar bears more often meet reindeer, as ice melts force the polar bears to spend more time on land.

Compare and contrast the new info (which is detailed in a a review article in the journal Frontiers in Ecology and the Environment) with the findings of the study “Response Behaviors of Svalbard Reindeer towards Humans and Humans Disguised as Polar Bears on Edgeøya” [Eigil Reimers and Sindre Eftestøl, Arctic, Antarctic, and Alpine Research, vol. 44, no. 4, 2012, pp. 483-9].

The humans-disguised-as-polar-bears study was honored with a 2014 Ig Nobel Prize. Co-author Eigil Reimers lectured about his adventures, two weeks ago, as part of the 2015 Ig Nobel EuroTour.

The photo below, by Brian Battaile, is supplied by the USGS: 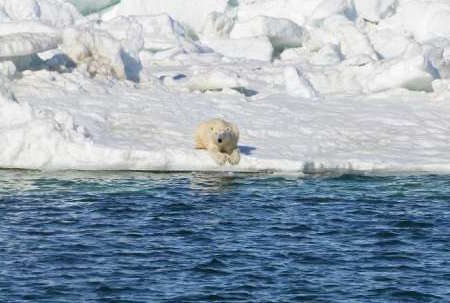