The first Vienna Ball of Sciences, held last night, was a roaring success, with the more than 2500 (the tickets sold out quickly) scientists, friends, and admirers exhibiting both brownian motion and traditional Viennese-waltz motion in strolling, dancing, chatting, sipping and noshing their way through the elegant ballroom and reception chambers of Vienna’s city hall, from 8 pm till 4 am.

The ball established itself as one of the (few) truly social, got-to-be-there events for the international science community, and for a hearty slice of Vienna’s social, political, and art haute monde. 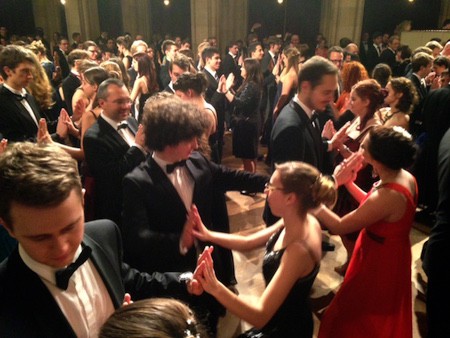 I played a small role, interviewing Katharina Gsöllpointner, Helmut Veith, and Jörg Schmiedmayer on stage, then performing a 24/7 Lecture, at midnight, on the topic “The influence of Vienna on science”. Katharina Gsöllpointner, Helmut Veith, Jörg Schmiedmayer, Barbara Blaha, and Florian Freistetter (who was also live-blogging the ball) jointly acted as a human clock mechanism, to enforce the 24-second time limit. Here is the text of my 24/7 Lecture:

SCHOEDINGER saw the waves, the rhythms, the dance-like qualities of elementary particles.

PAULI predicted that the parts of an atom prance in exclusive ways.

LORENZ learned that animals live in tune with their natures.

FREUD and his friends — who WANTED to be scientists — theorized a taxonomy of tangos in people’s heads.

Here’s a photo of Katharina Gsöllpointner, at the mayor’s reception that opened the ball, donning the ceremonial Ig Nobel chapeau claque, which traveled with me from Cambridge, Massachusetts:

Here’s Helmut Veith explaining his favorite big scientific mystery (note the orchestra behind us, drinking in the mystery): 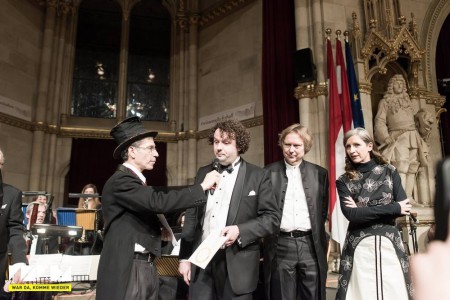 Congratulations, and a big thank you, to Oliver Lehmann, Katarina Singer, and the entire team and supportive supporters who created the Ball of Sciences from a universe that was, previously, lacking this certain something.

BONUS: Here’s an ORF television report from the ball. It  includes video of the “7 words” portion of the 24/7 Lecture: 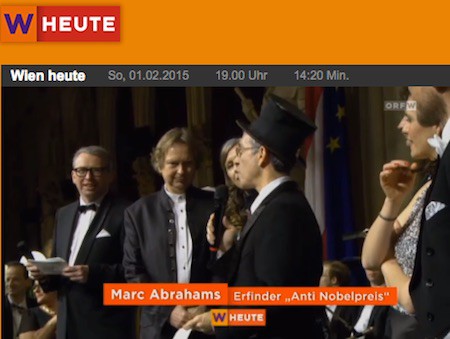 BONUS: There are lots more photos on the Warda site and on the Wissenshcaftsball site.