A new, celebrated medical paper echoes the beloved study that long ago earned an Ig Nobel Prize for medicine. The Los Angeles Times summarizes the new study, with the headline: 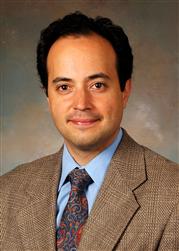 The new study does not mention that 2008 prize-winning study, but does mention an earlier paper by Dan Ariely, one of the 2008 study’s authors, about booze:

Thus does medicine advance, with mutters – if not always mentions – of similar discoveries, made earlier, by other people.

The University of Cincinnati, home of several of the new study’s authors, issued a proud press release, which begins:

Study: Perceptions of Drug’s Cost May Affect How Much Patients Benefit

CINCINNATI—People’s perceptions of the cost of a drug may affect how much they benefit from the drug, even when they are receiving only a placebo, according to new research from the University of Cincinnati (UC).

Alberto Espay, MD, [pictured here] an associate professor in the UC Department of Neurology and Rehabilitation Medicine and director and endowed chair of the James J. and Joan A. Gardner Center for Parkinson’s Disease and Movement Disorders at the UC Neuroscience Institute, describes the findings in the Jan. 28 online issue of Neurology…