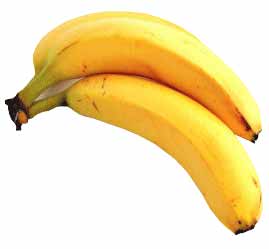 This year is (roughly) the 20th anniversary of the publication of EU Commission Regulation (EC) No 2257/94. So what better time to take another look at ‘Laying down quality standards for bananas’. The regulation caused, and continues to cause debate centering around the acceptable curvature of bananas – which some now cite as a standard example when trying to illustrate effects of what they see as bureaucratic meddling. For instance: ‘Farewell to bendy bananas’ (This is Money, 20 January 2005 )

However … a careful Improbable reading of the regulations reveals that there is definitely no statement specifying exactly how curvy bananas should or should not be – other than a blanket and indefinite declaration that they must be : “Free from malformation or abnormal curvature of the fingers.” But exactly what constitutes ‘abnormal’ remains undefined.

The regulation document does have some other important information – such as the correct way to measure the length of a banana:

“The length of the fruit expressed in centimetres and measured along the convex face, from the blossom end to the point where the peduncle joins the crown. […] The minimum length permitted is 14 cm”

And, the quantity in bunches:

“The bananas must be presented in hands or clusters (parts of hands) of at least four fingers. Bananas may also be presented as single fingers.” Meaning, we believe, that bananas can be sold in any number as long as it’s not 2 or 3.

Note: Rumour has it that the so-called ‘Bent-Banana’ rules are to be, or maybe even have been, scrapped – but Improbable has been unable to verify this.