There’s yet another demonstration of the subtle insights you can get from comparing the lengths of a person’s second finger and fourth finger. 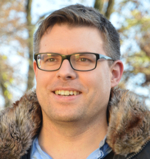 “We searched for differences in the 2D:4D ratios between 38 persons who stutter and 36 persons who do not stutter. In a second step, we investigated potential links between the 2D:4D ratio and the multifaceted symptomatology of stuttering, as measured by the Overall Assessment of the Speaker’s Experience of Stuttering (OASES), in a larger sample of 44 adults who stutter….

“In the first step, no significant differences in the 2D:4D were observed between individuals who stutter and individuals who do not stutter. In the second step, 2D:4D correlated negatively with higher scores of the OASES (representing higher negative experiences due to stuttering), and this effect was more pronounced for female persons who stutter.”

A summary for laypersons: The study suggests that knowing the relative lengths of someone’s fingers tells you nothing about whether that person is likely to stutter. The study also suggests that if that person happens to be a stutterer — and if that person is a she —then measuring the relative lengths of her fingers might (though the statistics are iffy) hint at how much she might suffer because of her stuttering, compared with other women who stutter but have different relative finger lengths. 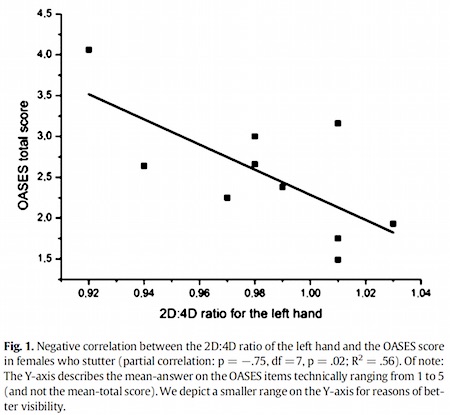