Still more finger-ratio insights from Professor John T. Manning, the father of finger-length studies. He has a new study:

“Gender inequality varies across nations, where such inequality is defined as the disproportionate representation of one sex over the other in desirable social, economic, and biological roles (typically male over female). Thus in Norway, 40% of parliamentarians are women, in the USA 17%, and in Saudi Arabia 0%. Some of this variation is associated with economic prosperity but there is evidence that this cause and effect can go in either direction. Here we show that within a population the average ratio of index (2D) to ring (4D) finger lengths (2D:4D)… is correlated with measures of gender inequality between nations…. In short, the more similar the two sexes were in 2D:4D, the more equal were the two sexes in parliamentary and labor force participation.” 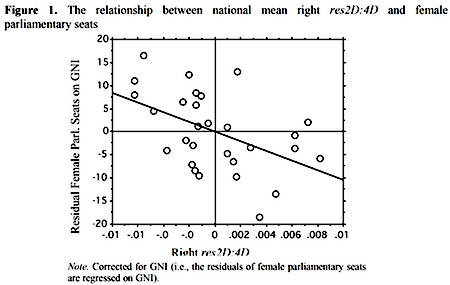