Vito Tartamella, in Parolacce, his blog about science and profanity, provides further information in the matter of Stronzo Bestiale (the question of the existence of whom we wrote about a few days ago, prompted by a report in Retraction Watch). Tarmatella’s Stronzo Bestiale report begins:

Would you read a paper written by Stronzo Bestiale (Total Asshole)? A dose of mistrust would be justified: the name says it all. Yet, in 1987, professor Bestiale, supposedly a physicist in Palermo,Sicily, authored major papers in prestigious scientific peer reviewed journals such as the  Journal of Statistical Physics, the Journal of Chemical Physics and the proceedings of a meeting of American Physical Society in Monterey. 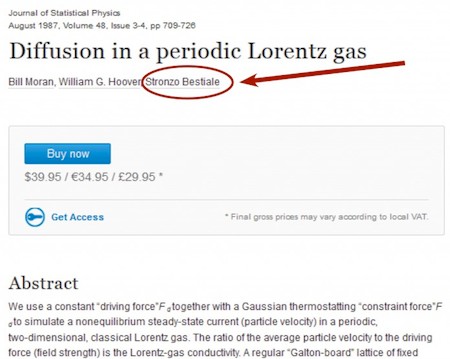 Given that surnames always intrigued me (they are the subject of my first book), I tried to find thisperson in Italian telephone directories. In Italy there are 7 Bestiale, mostly in Piedmont. None of them, however, has the name Stronzo (Turd or a Asshole: who would call their own son that?);between the Veneto and Trentino-Alto Adige there are 4 Stronziero, but this is also a surname.

In fact, Stronzo Bestiale does not exist as confirmed, when those scientific papers were published 27 years ago, by the then Chancellor of the University of Palermo, Ignazio Melisenda Giambertoni(another unusual surname!).

So I decided to investigate more thoroughly….