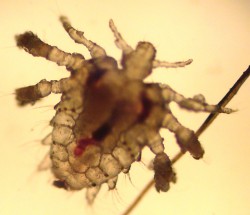 Again researchers in the UK took the lead in pubic lice research. After Nicola Armstrong and Janet Wilson of the Department of Genitourinary Medicine, The General Infirmary at Leeds, posed the intriguing question ‘Did the Brazilian kill the pubic louse’ in 2006, many feared the rapid disappearance of the primary habitat – human pubic hair – would bring down the numbers of Pthirus pubis, or at least the number of cases of pubic lice infestations seen by medical professionals.

However, they still see a future for the species:

As culture and practice changes, we may see a changing atypical pattern of pubic lice infestations, as they try to colonize other habitats such as chest or eyebrow hair.

BONUS: A well preserved sample of Dutch specimens of Pthirus pubis, kept in the collection of the Natural History Museum Rotterdam, from 1949 when they had nothing to fear:

And here is some history: my own hunt for pubic lice specimens, in 2007.