AMSTERDAM, Netherlands (AP) ? A Dutch museum said Friday it is having trouble getting its hands on a parasite that just about everybody else is anxious to avoid: crabs. 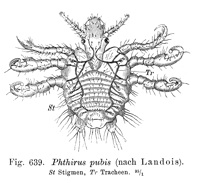 The Rotterdam Natural History Museum has appealed for somebody ? anybody ? to give it a single crab louse for its collection, amid fears they may be dying out.

“We have over 300,000 species represented in our collection,” he said. “Even though most of them are not on display, that doesn’t mean small, unpopular insects are less important scientifically.”

Moeliker said he began hunting in earnest for the species, also known as “pubic lice,” last year after reading an article published by British doctors in the June issue of the journal of Sexually Transmitted Infections.

The article, titled “Did the Brazilian Kill the Pubic Louse?” found that crabs rates had fallen first in women, and several years later in men in Leeds. The authors hypothesized that the bikini wax known as “The Brazilian” that removes all or most pubic hair, might be to blame.

“When the bamboo forests that the Giant Panda lives in were cut down, the bear became threatened with extinction. Pubic lice can’t live without pubic hair,” Moeliker said….

So says an October 19, 2007 Associated Press report. Kees Moeliker is the 2003 Ig Nobel Biology Prize winner (for his discovery of homosexual necrophilia in mallard ducks), and also now is the Annals of Improbable Research’s European Bureau Chief. Our European Bureau is located Rotterdam.

NOTE: To see an earlier stage of the crab louse project, see the October 2006 issue of Nieuw Rotterdam.