Wolter Seuntjens, in exploring yet another frontier that few have examined, made a discovery. In a newly published study, Seuntjens gives a clear explanation of how to interpret his  or anyone’s new discovery about anything. The study is:

“Mary Symmetrical and Mary Nonsymmetrical – A Hitherto Undetected Difference in the Iconography of the Two Most Important Women in the New Testament?” JUnQ, 4, 2, 18–27, 2014. Seuntjens first summarizes his research: 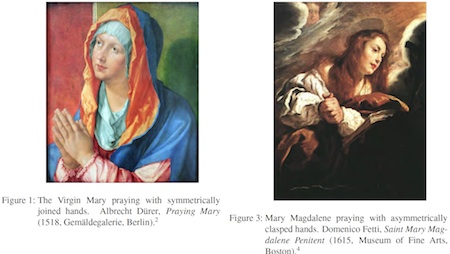 “Assuming that the observed pattern is indeed a new fact, it is difficult if not impossible to see in advance where this new fact will lead. But, if it is a new fact, then its interpretation and its possible connections with other facts and interpretations old and new should be addressed. If, however, the pattern is a fluke, then that is also interesting.”

Seuntjens also investigates blinking and winking. The blinking or winking eye you see here is from his web site.

Seuntjens’s new study appears in the journal JUnQ, the Journal of Unsolved Questions.