Here’s the latest chapter in a possibly endless series of papers by different mathematicians fancifully using the metaphors and mathematics of chaos to tell and re-tell tales of love:

“Love stories can be unpredictable: Jules et Jim in the vortex of life,” Fabio Dercole and Sergio Rinaldi, Chaos: An Interdisciplinary Journal of Nonlinear Science, vol. 24, 023134, 2014. (Thanks to investigator Mason Porter for bringing this to our attention.) The authors are at Politecnico di Milano, Italy. Here is a photo of the top portion of Fabio Dercole. The object behind him is a blackboard. 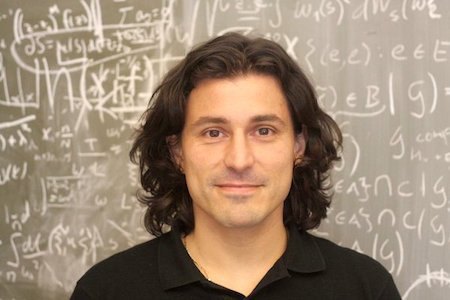 “Love stories are dynamic processes that begin, develop, and often stay for a relatively long time in a stationary or fluctuating regime, before possibly fading. Although they are, undoubtedly, the most important dynamic process in our life, they have only recently been cast in the formal frame of dynamical systems theory…. [We] conjecture that sentimental chaos can have a relevant endogenous origin. To support this intriguing conjecture, we mimic a real and well-documented love story with a mathematical model in which the environment is kept constant, and show that the model is chaotic. The case we analyze is the triangle described in Jules et Jim, an autobiographic novel by Henri-Pierre Roche that became famous worldwide after the success of the homonymous film directed by Francois Truffaut.

“[This figure shows a] graphical representation of two hypothetical love stories. (Left) Feelings’ time series. (Right) Trajectories in the plane of the feelings.” 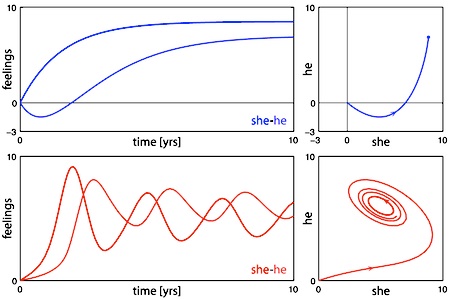 Here’s a snippet from the film Jules et Jim. We leave it as an exercise for the reader (i.e., you) to analyze the chaotic dynamics on view: