The clamoring for information about clownfish radiation may never be fully satisfied. This report, though, attempts to supply some of what’s desired:

“The radiation of the clownfishes has two geographical replicates,” Glenn Litsios, Peter B. Pearman, Déborah Lanterbecq, Nathalie Tolou and Nicolas Salamin, Journal of Biogeography, epub July 7, 2014. (Thanks to investigator Tom Gill for bringing this to our attention.) The authors, at the University of Lausanne, the Swiss Institute of Bioinformatics, the University of the Basque Country, the Basque Foundation for Science, the Université de Mons, and l’Université de Perpignan, report:

“we investigated the biogeographical history of the clownfishes, a clade of coral reef fish with ranges that now span most of the Indo-Pacific Ocean, in order to explore the geographical structure of an unusual adaptive radiation…. We generated DNA sequence data comprising seven nuclear markers for 27 of the 30 clownfish species. We then inferred a Bayesian phylogeny and reconstructed the biogeographical history of the group using three different methods. Finally, we applied a biogeographical model of diversification to assess whether diversification patterns differ between the Indian and Pacific Oceans…. While most species arose in the IAA, one clade colonized the eastern shores of Africa and diversified there. We found that the diversification rate of clownfishes does not differ between the main radiation and the African clade.” 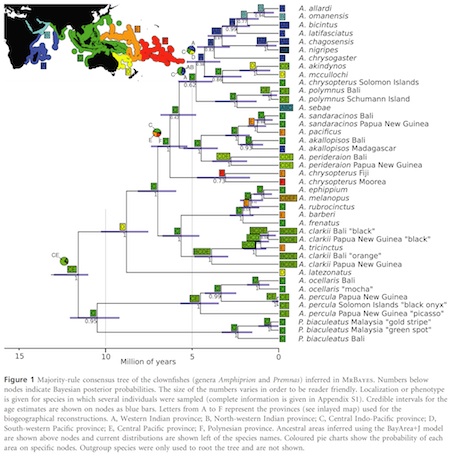