The Varshney twins – Dr. Kush Varshney (currently at IBM) and Professor Lav Varshney (previously at IBM) – have authored a series of papers on the theme of computational gastronomy, two of which — on Food Steganography, and on Active Odor Cancellation — we looked at recently.

Example 3 : ‘Flavor Pairing in Medieval European Cuisine: A Study in Cooking with Dirty Data‘ in: International Joint Conference on Artificial Intelligence Workshops, Beijing, China, August 2013. (The paper is co-authored with Jun Wang, also at IBM, and Daniel Myers at Medieval Cookery.) It not only examines the computational gastronomic implications of furmente with purpeys and zedoary, but also eles in brasill and chekin. 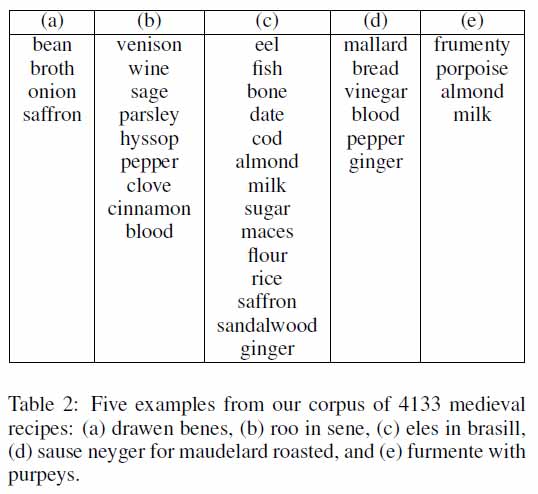 “In order to cook with computers, specifically by having the computer use the flavor compound pairing hypothesis to create new sets of ingredients in recipes, we must understand the effect of data dirtiness. Towards that end, in this paper we obtain two independent data sets of flavor compound data having different levels of completeness and accuracy, and compile a completely new corpus of recipes from the Late Middle Ages that has not been analyzed before.”

This concludes our short profile on the Varshney twins’ contribution to the field of computational gastronomics.