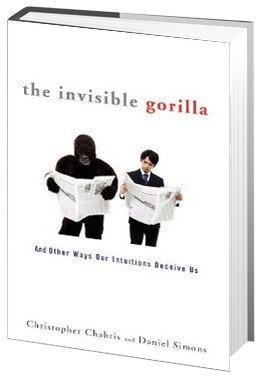 Unintentionally harking back to the Ig Nobel Prize-winning “Did You See the Gorilla” experiment, a Seattle PI news report says:

Loro Parque, an amusement park located on a Spanish island off the coast of Africa where SeaWorld warehouses their surplus orcas seems like it must be a dangerous place to work. Previously, one of their trainers was killed by one of SeaWorld’s orcas there, and now it seems that their vet can’t distinguish between a wild gorilla and one of their own employees dressed up in a gorilla suit.

During a practice drill, the employee donned the costume and ran around the grounds to add realism to the event, but apparently the vet didn’t know it was a drill and opened fire with his tranquilizer gun on the hapless employee – who apparently had an allergic reaction to the dose, designed to stop a 400 pound gorilla in its tracks.…

That Seattle PI report is based heavily on a report (in Spanish) by La Opinion de Tenerife, which begins:

Christopher Chabris and Daniel Simons were awarded the 2004 Ig Nobel Prize in psychology for demonstrating that when people pay close attention to something, it’s all too easy to overlook anything else — even a woman in a gorilla suit.

Their experiment — one of the most startling demonstrations about human nature — can be seen in the video below.  The Invisible Gorilla is a book by Chabris and Simons. They also write an Invisible Gorilla blog.

(Thanks to Miss Conduct for bringing this to our attention.)

UPDATE (June 6, 2014): El Pais reports that yes, the man was shot — but no, he was not wearing a gorilla suit. The report is vague about how the notion of a gorilla suit originally, if erroneously, entered the picture.