Ig Nobel Prize winners Marie Dacke and Emily Baird are now exploring how how bees collide or don’t is different from how fish collide or don’t. They and their colleagues have just published a study of the matter.

NOTE: Dacke and Baird will be part of the Ig Nobel shows at ESOF in Copenhagen in June! 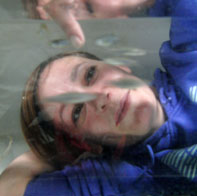 “Control of self-motion in dynamic fluids: fish do it differently from bees,” Christine Scholtyssek [pictured here], Marie Dacke, Ronald Kröger and Emily Baird, Biology Letters, vol. 10, no. 5, 2014, 20140279. (Thanks to Tony Tweedale for bringing this to our attention.) The authors, at Lund University, report:

“To detect and avoid collisions, animals need to perceive and control the distance and the speed with which they are moving relative to obstacles. This is especially challenging for swimming and flying animals that must control movement in a dynamic fluid without reference from physical contact to the ground. Flying animals primarily rely on optic flow to control flight speed and distance to obstacles. Here, we investigate whether swimming animals use similar strategies for self-motion control to flying animals by directly comparing the trajectories of zebrafish (Danio rerio) and bumblebees (Bombus terrestris) moving through the same experimental tunnel. While moving through the tunnel, black and white patterns produced (i) strong horizontal optic flow cues on both walls, (ii) weak horizontal optic flow cues on both walls and (iii) strong optic flow cues on one wall and weak optic flow cues on the other. We find that the mean speed of zebrafish does not depend on the amount of optic flow perceived from the walls. We further show that zebrafish, unlike bumblebees, move closer to the wall that provides the strongest visual feedback.”

BONUS: The 2005 Ig Nobel Peace Prize was awarded to Claire Rind and Peter Simmons of Newcastle University, in the U.K., for electrically monitoring the activity of a brain cell in a locust while that locust was watching selected highlights from the movie “Star Wars.” [REFERENCE: “Orthopteran DCMD Neuron: A Reevaluation of Responses to Moving Objects. I. Selective Responses to Approaching Objects,” F.C. Rind and P.J. Simmons, Journal of Neurophysiology, vol. 68, no. 5, November 1992, pp. 1654-66.]