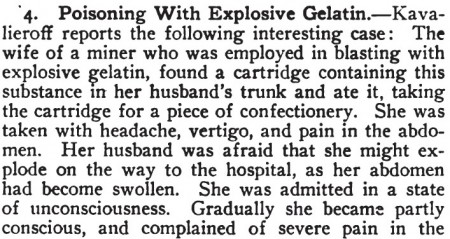 Gelignite, or blasting gelatin, is a mixture of nitroglycerin, gun cotton, and a combustible substance like wood pulp. It resembles dynamite (also invented by Alfred Nobel) but can be conveniently molded into shape with the bare hands.

The October 6, 1904 issue of Roussky Vratch (Русский врач , or “Russian Doctor”, a journal that still exists today) contained a dispatch from one I. N. Kavalieroff, about a young woman who “found a cartridge containing this substance in her husband’s trunk and ate it, taking the cartridge for a piece of confectionery.”

Despite her husband’s fears, she neither exploded nor expired from the effects of the poison, as summarized in the New York Medical Journal six weeks later.

In view of the fact that explosive gelatin … gives off a quantity of nitrous acid vapors while decomposing, the stomach was washed with a solution of sodium bicarbonate, and a number of bubbles of gas escaped. A dose of castor oil was poured into the stomach tube, the patient was given a subcutaneous injection of caffeine, sodium benzoate, and ergotine, and coffee internally. The patient had a copious evacuation and quickly recovered.

The symptoms, therefore, were those of poisoning with nitroglycerin, amyl nitrite, etc. The dose of nitroglycerin taken by this patient was two ounces, or six thousand times the therapeutic dose.

We can find no subsequent reports of Russians confusing nitroglycerin-based explosives with candy, so it’s likely that the imperial ministry of mines changed their gelignite formulation to be less appetizing.