Various press outlets in Zimbabwe and neighboring countries are suggesting that Ig Nobel Prize winner Gideon Gono will be the next president of Zimbabwe, if and when Robert Mugabe, the current president, ever leaves office. Dr. Gono recently stepped down from his position as governor of Zimbabwe’s Reserve Bank.

Dr. Gono was awarded the 2009 Ig Nobel Prize for mathematics, for giving people a simple, everyday way to cope with a wide range of numbers — from very small to very big — by having his bank print bank notes with denominations ranging from one cent ($.01) to one hundred trillion dollars ($100,000,000,000,000). 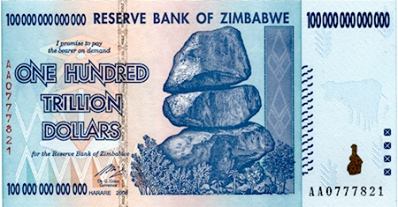 Here are a few of the news reports:

ZimDaily [April 20, 2014]: “Gideon Gono, 54, the former governor of Zimbabwe’s reserve bank, has emerged as the favourite to succeed Robert Mugabe as president. As his health begins to fade, Mugabe, 90, who has ruled Zimbabwe for 34 years, has begun to cast around for a political heir….”

Allafrica.com [May 2, 2014]: “In March, rumour circulated that ZANU PF leader Robert Mugabe was seriously considering sacking him and replacing him with blue-eyed boy Gideon Gono….”

The Telescope News [May 2, 2014]: “[The] media in Harare has been awash with reports about Grace pushing for former reserve bank chief, Gideon Gono, to replace Mugabe. The first lady is said to have become interested in the country’s politics after it emerged that a section within the ruling party was pushing for Mugabe, to quit before his five-year term of office expired in 2018. Central Intelligence Organisation (CIO), operatives have been leaking information about the close ties between the Mugabe and Gono families, amid reports that the two families are exchanging frequent personal visits, with many inside Zanu PF interpreting this as an indication that, the ailing leader is now grooming Gono….”