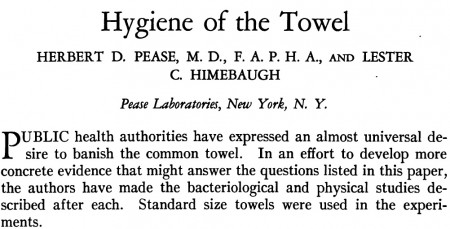 We’ve probably all wondered, when drying our hands… this is supposedly a net transfer of germs from us to the towel, but at what point does the towel become so filth-riddled that we are now transferring germs from the towel to us?

An early investigation of this was done in the American Journal of Public Health (August 1930: vol. 20, no. 8, pp. 820-832) by Herbert Pease and Lester Himebaugh of the Pease Laboratories (previously Lederle Laboratories, before Herbert Pease came along). They used ingenious methods including multiple types of towels (“Huck”, “Turkish”, and paper) and bacteria of three distinct colors: Flavobacterium lutescens for yellow, Bacillus prodigiosus (now called Serratia marcescens) for red, and Micrococcus aureus (now called Staphylococcus) for golden orange.

Their results were altogether dispiriting and distressing. In brief: bacteria don’t die on towels; they are as easily transmitted between people via towel than by direct human-to-human contact; and you can’t cheap out on towels, because the high-quality Turkish ones clearly remove the most bacteria from the skin. The quantitative towel hygiene field seems to have made no advances for decades thereafter, as investigators were too depressed by what they might find.