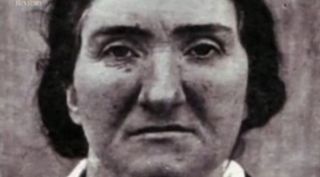 …Leonarda Cianciulli, a.k.a. the “Soap Maker of Corregio” and her bizarre criminal career.    While almost unknown outside of Italy, Leonarda’s career as a serial killer is still unparalleled in many ways, both for her unique method of concealing bodies and her rather odd motive for killing….

Her first victim was a 50-year-old spinster named Faustina Setti….  According to the official statement [Cianciulli] gave to police afterward,

I threw the pieces into a pot, added seven kilos of caustic soda, which I had bought to make soap, and stirred the whole mixture until the pieces dissolved in a thick, dark mush that I poured into several buckets and emptied in a nearby septic tank. As for the blood in the basin, I waited until it had coagulated, dried it in the oven, ground it and mixed it with flour, sugar, chocolate, milk and eggs, as well as a bit of margarine, kneading all the ingredients together.  I made lots of crunchy tea cakes and served them to the ladies who came to visit, though Giuseppe and I also ate them.

The story has elements in common with two modern fictional works, Fight Club and Sweeney Todd. Some day, perhaps someone will write an opera about the Corregio Soapmaker (it would almost have to be called The Soap Opera). Behold a bit of Sweeney Todd:

(Thanks to investigator Jennifer Ouellette for bringing this to our attention.)

BONSU: One person’s assessment of How to make Fight Club soap