A new paper relates the apparent clumpings of stars to those of humans. Astronomer Alon Retter, who earlier posited a mathematical similarity between astronomical objects and human children, gives full details of his work:

“An Intriguing Correlation between the Distribution of Star Multiples and Human Adults in Household,” Alon Retter, International Journal of Astronomy and Astrophysics, vol. 3, no. 2, 2013, pp. 153-160. Retter writes:

“It is a known fact that like people, some stars are singles, many others tend to couple in binaries, and fewer are in triples etc. The distribution of multiplicity in the 4559 brightest nearby stars was matched with that of human adults in household in six countries, in which this information could be dug and estimated. A strong resemblance between the two curves is evident. Monte Carlo simulations suggest that this result is significant at a confidence level higher than 98%. Apparently, there should be no connection between the two populations, thus this striking result may supply some clues about the way Nature works. It is noted that extended versions of this work were proposed three years ago, and two predictions of this absurd model have already been verified.” 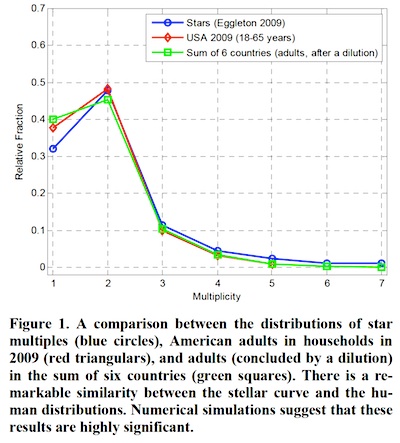