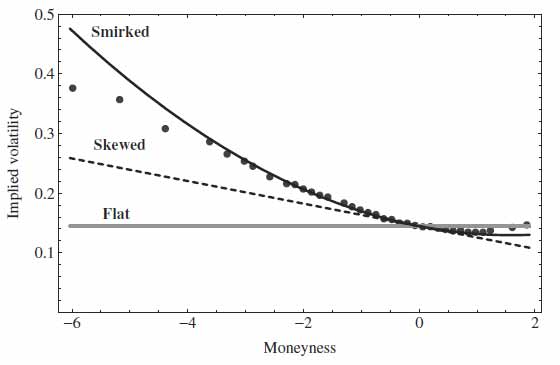 Those who follow developments in the derivatives market, and particularly in its sub-section, the options market, may be aware of the concept of Smirkness. It was first proposed at the 2005 China International Conference in Finance, where professors Jin Zhang and Yi Xiang presented their paper ‘Implied Volatility Smirk’

And a third paper from the team, this one called : ‘The Implied Volatility Smirk’ went into even greater detail – and this time provided graphs like the one above which showed : “The flat, skewed and smirked implied volatility functions together with market implied volatilities (shown as dots) on 4 November 2003 for SPX options that mature on 21 November 2003.”

“Banks may have had an ulterior motive for the growth of derivatives. The more complex the product, the harder it was for investors to see the price. The result was fat fees for the banking sector.”