As many a mainstream media outlet has noted, the Food and Agriculture Organization of the United Nations (FAO) has recently released a 200 page book which lays out the case for encouraging entomophagy – especially amongst somewhat resistant Westerners. ‘Edible insects : Future prospects for food and feed security’. Unfortunately for those inspired to investigate and experiment further, the document stops short of listing all the (known) edible insects. Turn instead then to a previous FAO document. ‘Edible Forest Insects : Humans Bite Back’ which reproduces a table compiled in 2005 by Dra. Julieta Ramos Elorduy Blásquez of the Instituto de Biología at the Universidad Nacional Autónoma de México (UNAM). 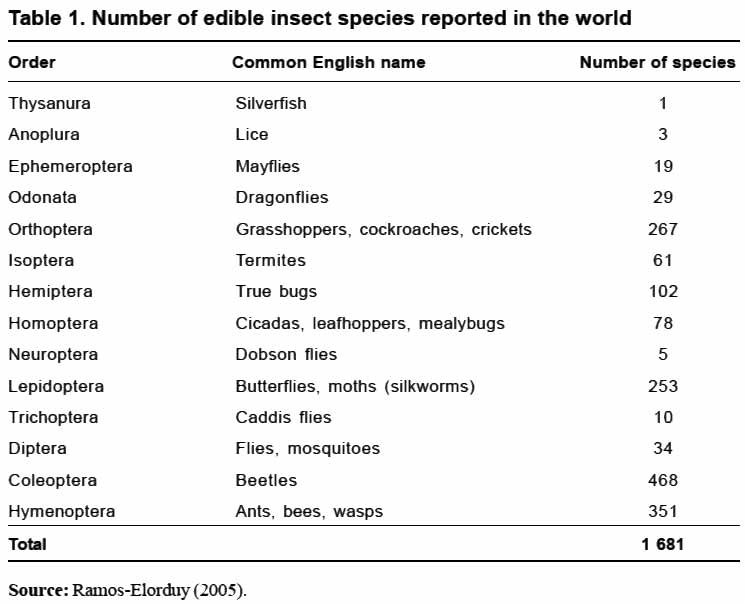 NOTES:
[1]  Involuntary entomophagia (eating insects without knowing it) is already a daily reality for many millions of Westerners  – albeit in rather tiny amounts. See data from the United States Food and Drug Administration (FDA) with regard to ‘Food Defect Action Levels’

[2] ‘Edible Insects’ “… also covers other arthropod species eaten by humans, such as spiders and scorpions, which, taxonomically speaking, are not insects.”

[3]  The slightly alarming illustration above is from Bug-A-Licious : Extreme Cuisine by Meish Goldish. (Bearport Publishing, 2009)