A mere eleven years after the inventors of Bow-Lingual were awarded the Ig Noble Peace Prize, Con Slobodchikoff, professor emeritus at Arizona State University and President and CEO of Animal Communications, Ltd., explains how near we are to having computer-aided communications with some animals. Megan Garber interviewed Slobodchikoff for The Atlantic. Here’s a bit of that interview:

So I think we have the technology now to be able to develop the devices that are, say, the size of a cellphone, that would allow us to talk to our dogs and cats. So the dog says “bark!” and the device analyzes it and says, “I want to eat chicken tonight.” Or the cat can say “meow,” and it can say, “You haven’t cleaned my litterbox recently.”

But if we’re going to get to that technology, it’s going to take some research. And it’s probably five to 10 years out. But I think we can get to the point where we can actually communicate back and forth in basic animal languages to dogs, cats, maybe farm animals — and, who knows, maybe lions and tigers. 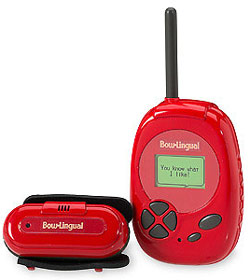