A joint research team from the US National Institute of Mental Health and North Carolina based Cielo Institute have discovered what they call ‘Strudels’ in magnetoencephalography symmetric sensor difference (MEG-ssd) brain-scans. 17 experimental subjects were brain-scanned in an ‘eyes-closed’ and ‘task-free’ state. In other words they were permitted to relax and think about anything they pleased – encouraging so-called Task Unrelated Thoughts (TUTs). During this daydreamy state :

“Strudels manifesting time scales of five to fifteen seconds appear to emerge vertically, across scale, from irregular faster frequencies of 100 Hz or greater.” 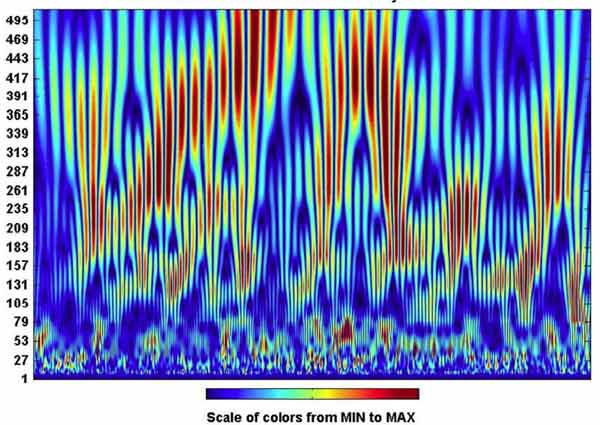 The strudels, pictured above :

“ … can be interpreted as neurophysiological correlates of the spontaneous intrusions into consciousness of the never idle unconscious mind.”

The strudels appear as turbulent-looking disturbances in the scans, leading to radical ideas for their possible analysis :

“In recent fundamental physics, vacuum fluid fluctuations at the Planck length scale and emergent hierarchical turbulent dynamics have been invoked in a radical new theory of reality. We might use this new ‘turbulence theory of everything’ to justify the use of turbulence mathematics to characterize the dynamics of the brain’s magnetic fields.”

There is more work to be done, however, in pinpointing the strudels’ relation to what Freud called the unconscious (Ucs) and the conscious (Cs) mind.

“The question concerning whether the strudels and entropies of brain information bearing, magnetic fields are Cs itself or reflections of intermittent daydreaming intrusions into it by the Ucs remain.”

BONUS: The authors give an example of a Freudian Slip.

“A Freudian slip occurs when you mean one thing, but you say your mother.”