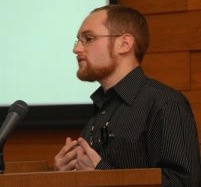 A new line of research examines what happens in an office where the positions of the cubicles and walls—even the coffee pot—are all determined by data.

…For instance, what if office coffee machines moved around according to the social context? When a coffee-pouring robot appeared as a gag in TV commercial two years ago, I thought seriously about the uses of a coffee machine with wheels. By positioning the coffee robot in between two groups, for example, we could increase the likelihood that certain coworkers would bump into each other. Once we detected—using smart badges or some other sensor—that the right conversations were occurring between the right people, the robot could move on to another location. Vending machines, bowls of snacks—all could migrate their way around the office on the basis of social data. One demonstration of these ideas came from a team at Plymouth University in the United Kingdom. In their “Slothbots” project, slow-moving robotic walls subtly change their position over time to alter the flow of people in a public space, constantly tuning their movement in response to people’s behavior.