Geneva, Switzerland (and environs) will host lots of Improbability during the next week or so: two events. Both events will be webcast. Soprano Maria Ferrante and pianist Alice Martelli will perform songs from Ig Nobel operas, at both events. 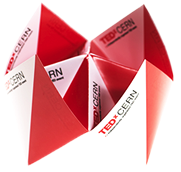 I will do a TEDx CERN talk on the topic: “Why All Good, and Some Bad, Research is Improbable“:

Ig Nobel at the University of Geneva

The University of Geneva show features genuine Ig Nobel Prize winners, who will explain, as best they can, what they did and why they did it: