On television — especially American television — forensic scientists almost always figure out the identity of mysterious corpses. This study suggests that the actual results — in real life, dealing with real corpses — may not be as good, especially outside America:

“The identification of cadavers (the main activity of forensic odontologists and anthropologists) is a crucial issue in forensic pathology, but the official entity of this problem is still poorly known in most countries, apart from a few American reports. In this article the authors present a descriptive study of unidentified decedents over a 14-year period (1995–2008) in Milan. The number of cadavers or human remains arriving at the morgue with no identity amounts to 454 – 3.1% of all autopsies at the Institute of Legal Medicine, with a mean of 32 unidentified subjects every year; 62% reached a positive identification in a period of time ranging from a few days to 10 years. 17% on an average remain unidentified.”

Detail from the study [which also explains “21% are AKAs (“also known as”), whose identification is not certain”]: 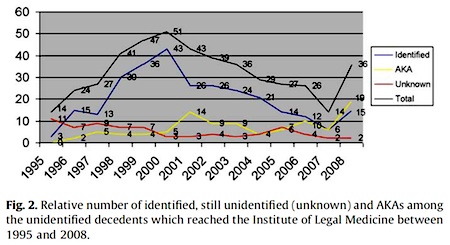 (Thanks to investigator Gregory Tallas for bringing this to our attention.)