Investigator Sally Shelton alerts us to this art/science news, reported by Deadline: 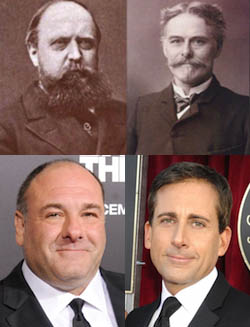 After recently co-starring together in The Incredible Burt Wonderstone, Steve Carell and James Gandolfini are reuniting for another comedic movie, this time on TV. Carell and Gandolfini are set to star and executive produce HBO Films‘ Bone Wars. The project, now in development, is based on the real-life Bone Wars (aka the Great Dinosaur Rush) between Edward Drinker Cope of the Academy of Natural Sciences in Philadelphia and Othniel Charles Marsh of the Peabody Museum of Natural History at Yale. Set during the post-Civil War birth of American science, the film is a sophisticated comedy about one of history’s most notorious feuds — the great dinosaur fossil race between paleontologists Marsh (Gandolfini) and Cope (Carell) — a decades-long competition that led to the discovery of more than 160 dinosaurs and their mutual downward spiral….

Earle Spamer, the great modern scholar of the saga of Cope and Marsh, has written about them again and again (and maybe other times, too) in the Annals of Improbable Research. Here are some of his findings:

Edward D. Cope, Heads Above the Rest, the First Electronic Publisher in Science

This perhaps bodes good times ahead for the two museums whose histories are intertwined: the Academy of Natural Sciences and the Peabody Museum of Natural History.

BONUS: The feud recreated (by penis-mechanics researcher Diane Kelley) as a game: BONE WARS: The Game of Ruthless Paleontology

BONUS:  A chapter beyond the famous feud: The oddity of Henry Fairfield Osborn