“In the ﬁrst aggregation (Figure 1B) we witnessed a male in axillary amplexus with one dead female (Figure 1C), and he extracted her oocytes by squeezing the sides of her belly with rhythmic movements of his front and hind limbs (Figure 1C). We did not check the fertilization of eggs because of lack of materials suitable for observations in the ﬁeld. During the second reproductive event, four R. proboscidea males were seen extracting oocytes from dead females. Three of them were not interrupted by other males but, on one occasion, a male was observed pushing the amplectant dead female around the pond, apparently to avoid other males. This male continued to compress the dead female’s abdomen during such displacements and the oocytes kept being expelled.”

Thanks to Ed Yong for bringing this to our attention. He discusses the matter in an essay that is, in its way, beautiful. 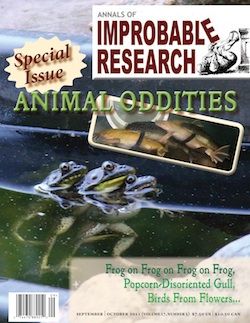